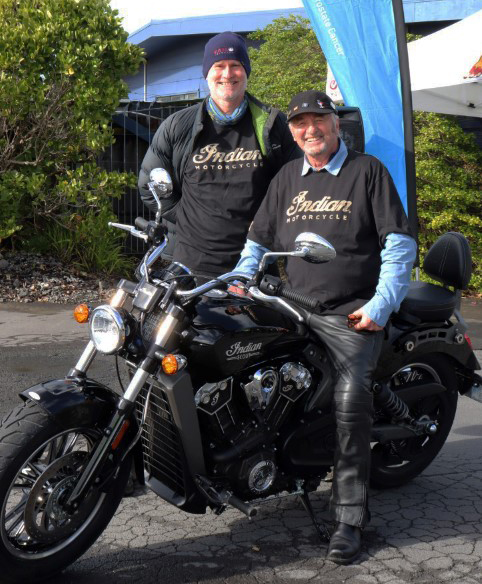 More than 400 bikers roared through the streets of Auckland, Waikato, Palmerston North, Wellington and Christchurch in support of the thousands of Kiwi blokes affected by prostate cancer. Their combined efforts helped raise more than $25,000 and a heap of awareness along the way.

We were very proud to announce a new partnership with Indian Motorcycle as major sponsor, who generously donated one $500 Indian Motorcycle voucher at each location. We would also like to acknowledge everyone whose support helped make Bikers in Blue 2019 such a great success, including all our riders and ride leaders, and: Auckland Transport, NZ Police, Blue Knights Motorcycle Club, PlaceMakers, The Vines Bar & Grill, Left Hand Break, Raglan Club, and Freemasons New Zealand. Last but not least, a very special thanks to Ambassador Ray Woolf who led the charge in Auckland. Check Media Gallery for photos and video.

If you’d like to register your interest as a Ride Leader, would like us to keep you updated as ride details are confirmed, or would like to discuss Bikers in Blue sponsorship opportunities please contact Events & Promotions Manager Carol Roche | carol@prostate.org.nz | 09 415 2404. 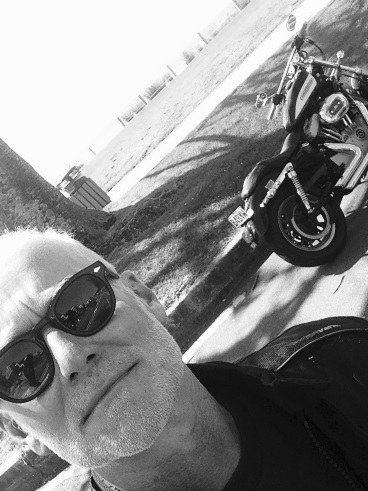 I love the outdoors and seek any opportunity I can to get on two wheels. I change bikes like I change underwear, often, and my stable currently consists of a scooter, MV Augusta Brutale, Harley Davidson Forty Eight and KTM Duke 690r. The bike, originally from the UK has been in New Zealand for 5 years,  and was in need of some TLC. It’s a great urban commuter and loves to churn the hills on SH16. My beloved Harley Sportster (as in picture) is just a memory now.

I’m a passionate supporter of the Prostate Cancer Foundation and only too happy to put my time and energy into supporting the work they do. Several of my close friends have been diagnosed with prostate cancer, and one is currently undergoing chemo treatment for an advanced case. I’m only too happy to do what I can do to drive the message home. If you haven’t had a check-up, do it! Blokes tend to get their bikes serviced more often than they get themselves checked up – if you haven’t had a prostate check, do it this month and support Bikers in Blue.

Dean (right) and Bush (left) have both been riding motorcycles since they were 15 years old, and always keen to ride and support fundraising events like Bikers in Blue, a great opportunity to give back to a great cause. Dean says he is now of age and feels this topic needs to be made more aware to kiwi males. He is partaking in this ride to pass on the message ‘get annual checkups, it’s the cool thing to do’. Bush works for St John Ambulance, currently riding with other emergency servicemen and women on a social basis. Prostate cancer awareness is a hot topic for him, he wants to be around for a few more years riding. He has annual checks and encourages other men to do the same. 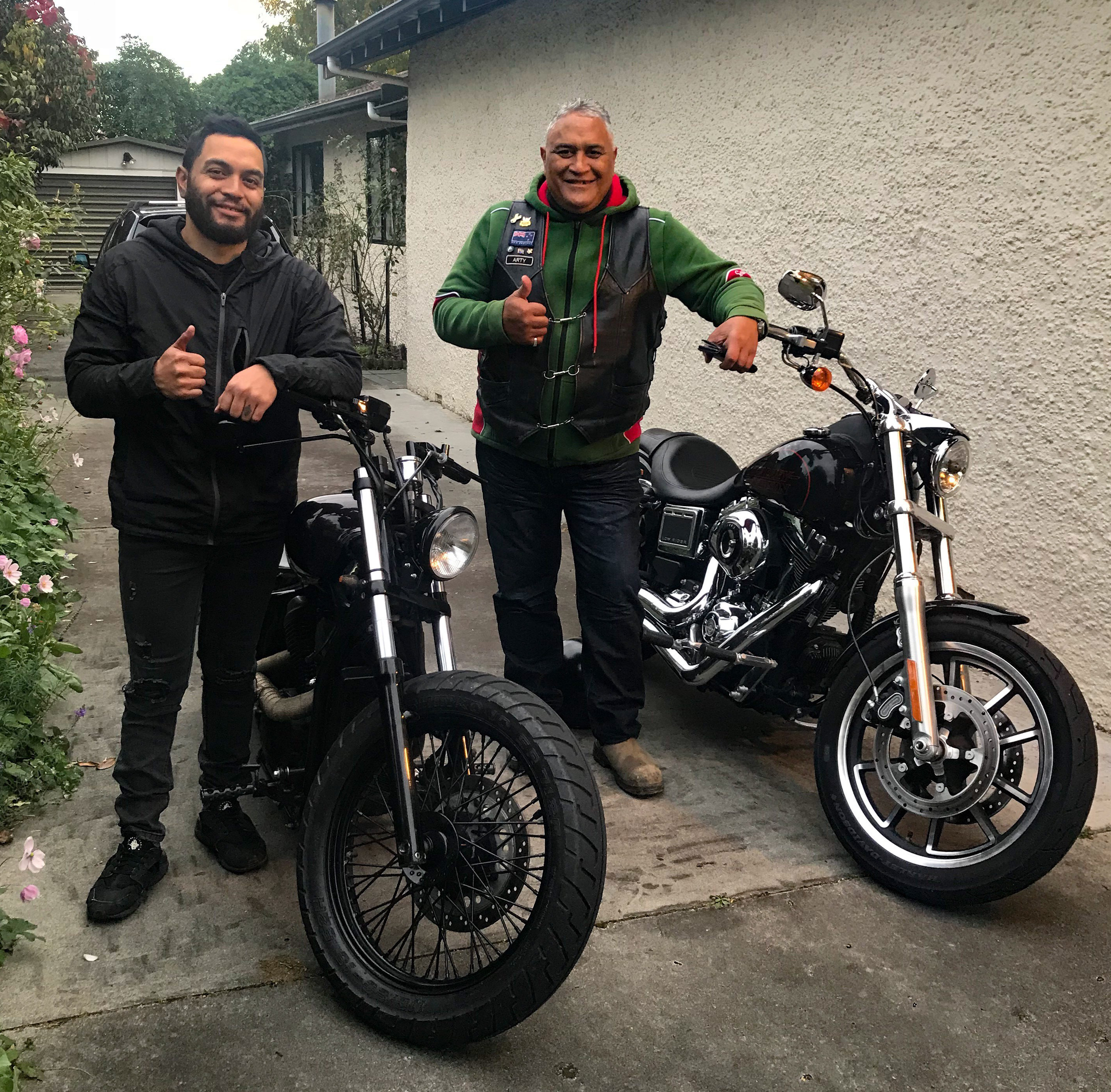 “My father Arty Tepania passed away in October last year from prostate cancer. We had planned on attending the Bikers in Blue ride in Wellington 2018, but due to his health we couldn’t attend. I picked up riding in April 2018 as a way of connecting with the old man and in the five months we were able to go on a few rides where he taught me a thing or two. He was a very passionate rider and known amongst many clubs here in the Manawatu. I am very passionate when it comes to helping the community and men’s health, and leading the Bikers in Blue ride in the Manawatu is how I aim to spread awareness, and also in honour of the old man. This is Arty (right) and myself the first day I picked up my bike. I now ride his Harley.” Neil Brocklehurst is the founder and senior tour guide at Real Aotearoa and has been riding motorcycles since he was 13 years old. Neil sees Bikers in Blue as a Real opportunity to get involved in something that effects far too many Kiwi blokes. By raising funds and riding together you can not only assist with the research but also increase awareness of this treatable disease. There’s nothing unmanly about being involved or getting an annual check-up! 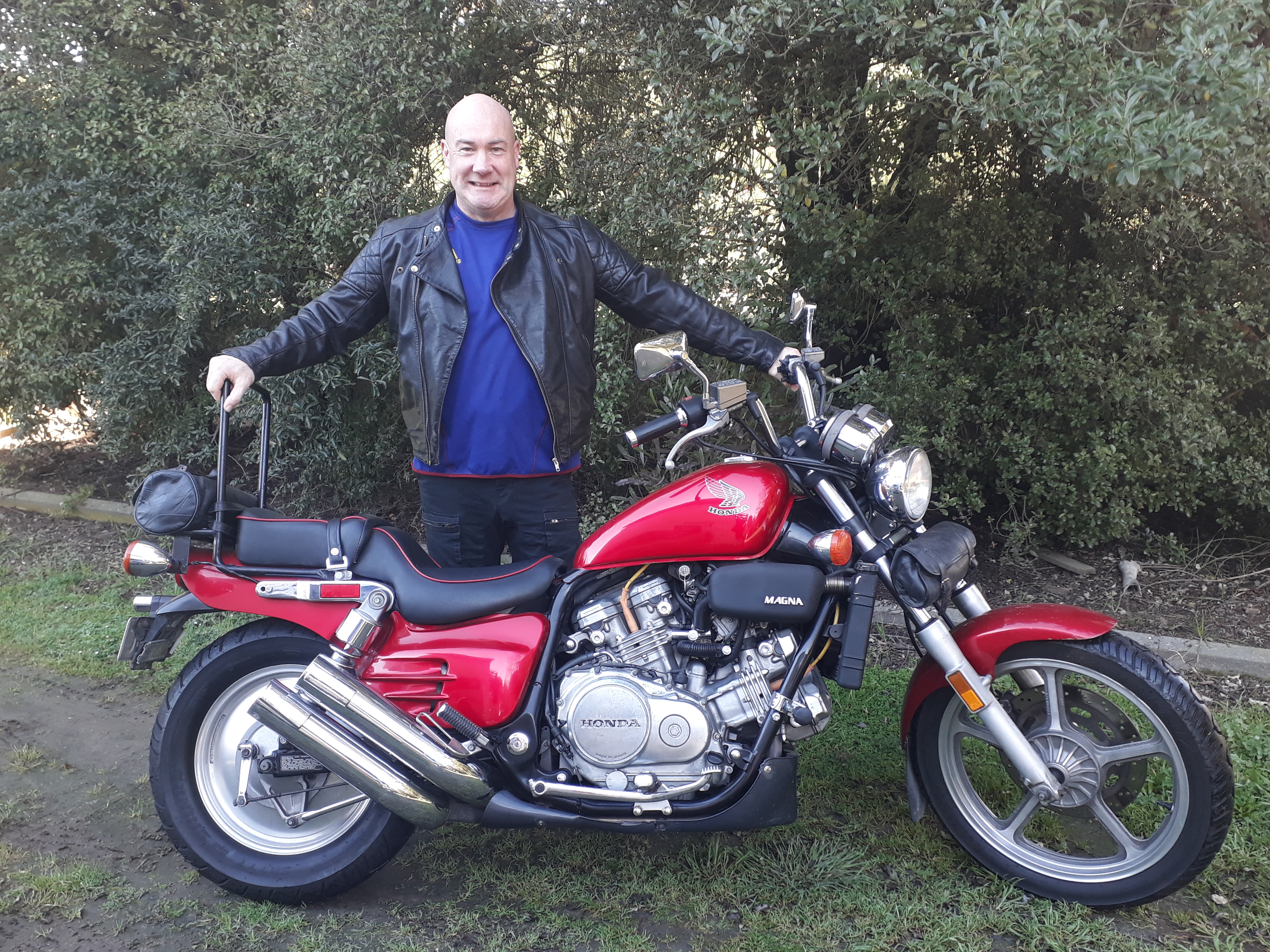 I clearly remember my first ride on a motorcycle at 9 years of age and I was hooked! Nearly 40 years later I still get that same thrill every time I press the starter. I haven’t been affected personally by prostate cancer, but I know quite a few men that have, and there is a common theme amongst them. Once they come to terms with their diagnosis they want to squeeze as much as they can out of life….and life on a motorcycle is truly living! If our ride can encourage just one man to get checked then it’s a success, but we also need to raise funds to support the ongoing work of the Prostate Cancer Foundation so that they can support men fighting this disease.